What languages is Sundanese most closely related to? 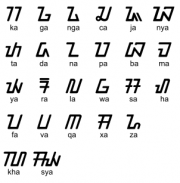 The Sundanese language is incredibly interesting. The language is native to Indonesia and the vast majority of speakers are Sundanese, Bantanese, Cirebonese, and Badui by ethnicity.

It is the official language in West Java as a regional language, but it’s also spoken in Banten, Jakarta, and parts of Central Java. Roughly 39 million people speak this language, yet it’s exceptionally rare to hear it spoken outside of the above locations, especially in the Western world.

Sundanese is most closely related to Madurese, Malay, and Javanese. The language has several dialects which are mutually intelligible. Here’s a run-down of those dialects:

The Sundanese language’s most closely related languages, Madurese, Malay, and Javanese, are not fully intelligible. Although some of these languages have similar negations and prepositions, they are considered completely different. Javanese is the single most closely related language to Sundanese. This is the language of the Javanese people hailing from the central and eastern parts of Java in Indonesia. In these parts of Java, Sundanese is spoken to a lesser extent – there are an estimated 82 million Javanese speakers compared to 38 million for Sundanese.

This makes sense when you consider that the Sundanese people are the second-largest ethnic group in Indonesia. The vast majority of Sundanese people speak Javanese, and vice versa, making Indonesia a very bilingual country.

Interestingly, Sundanese can be written in different writing systems, whereas Javanese is now largely written in the Latin script solely. The modern Sundanese script is largely used for the Sundanese language. The culture of the Sundanese people is, like the language, very interesting. It’s a highly respectful culture that values honesty, integrity, and education. In the 20th century, the Sundanese were able to establish a united Indonesian nation. West Java, where Sundanese is largely spoken, is one of the nation’s richest provinces.