Is Finnish an Easy Language to Translate? 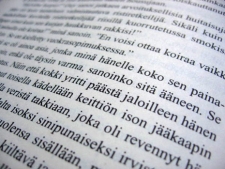 When you start learning a European language you’ll often see words that are very similar, which can make it easy to get your head around learning a new language.

However, what you’ll find when it comes to Finnish is that the language is made up differently, with words formed in different ways which can make it a little harder to learn – but not impossible. There is a widely recognised phenomenon called Sprachbund which shows that different geographical areas share similarities including language. The origins of the languages are different, but there are some vocabulary features which are common between some Scandinavian languages.

Finnish is a demanding language because of the way words are made up and formed. When you start to study nouns and verbs you’ll see that they have different inflectional types which you’ll need to get your head around. This can make translation difficult even when you have learned the language because they have very flexible grammatical rules.

If you’re learning Finnish then it is worth asking your tutor how they are going to approach it. You’ll find very different opinions as to whether grammar or vocabulary should be taught first. A lot of the time this will depend on the purpose of the course and how in depth it is covering the language. One thing for sure is that if you’re planning to become a Finnish translator you’ll need to look at an in-depth course to make sure that everything is covered.

Things you need to understand before you can translate Finnish include:

If all of that seems a little bit confusing to you then you might not quite be ready to translate Finnish. It isn’t impossible to translate Finnish, but you do need to have a firm understanding of it before you get going. A simple sentence often has lots of grammatical rules attached to it, so you’ll need to watch out for this.

All in all, Finnish is not a difficult language to learn and translate, but often the problem comes from knowing where to start with it. That is without taking into account the equivalent of Finnish slang language and the different way people talk. That said, once you know it, translating it can only get easier with practice.