Interesting facts about the Latvian Language 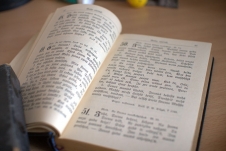 Latvian is spoken by roughly 1.3 million people primarily by the Latvian population in Latvia, where it is the official language. Latvian is not largely spoken outside of Latvia, however the Latvian people have migrated to other countries within the EU.

Interestingly, Latvia has a large number of non-native speakers inside Latvia and the immigrant and minority population in Latvia is roughly 700,000 – this includes Russians, Ukrainians, Poles, and Belarusians.

A Baltic language, Latvian is most closely related to Lithuanian, however they are not mutually intelligible. Therefore, Latvian is rather unique. Languages that are mutually intelligible include Latgalian and New Curonian. These are actually languages spoken inside Latvia, however there is a disagreement as to whether they should be classed as separate languages or simply different varieties of Latvian.

The exact time that Latvian came into prominence in Latvia is not known, however it can be dated back to the 16th century on the basis of other Baltic languages, such as Semigallian and Selonian, being formed at roughly this time. In Western print, Latvian first appeared in the mid-16th century in Sebastian Münster’s Cosmographia Universalis in Latin script.

The Baltic languages are very interesting to language translators because they seem to retain many of the features of the earliest Proto-Indo-European language. Latvian is particularly interesting because it emerged during several centuries by language spoken by the ancient Latgalian tribe. Over time, tribe languages in Latvia lost out to the broader language which is known as a process of consolidation. Surprisingly, the Latvian language was actually heavily influenced by the German language in the 19th century, due to a population of Baltic Germans living in Latvia. The languages are not mutually intelligible, though.

Latvian has significant linguistic and cultural differences from English, and therefore, it’s a difficult language for English learners to master. Here at Network Languages, we translate English to Latvian and Latvian to English using only native speakers, and have a specialist team of language experts on hand to ensure that your translation projects are fulfilled.