Interesting Facts about the Greek Language 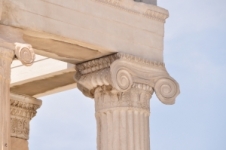 The Greek language is a language that everyone has heard of; it seems like it is one of those languages that has been around forever, and a language that isn’t’ going anywhere anytime soon

It is the longest documented language of all the Indo-European languages, having its history document for thirty-four centuries of the written record.  The Greek language is a branch of the Indo-European families of language.  It is a native language to the Balkans, Aegean Islands, Cyprus, and western Asia Minor, and there are plenty of interesting things about it.

For starters, Greek literature holds a huge place in the world, especially Europe.  Poems such as the Iliad and the Odyssey have shaped the literature of the world for centuries, and the Greek alphabet, which is an adaptation of an earlier north Semitic script (generally thought to be Phoenician or Canaanite), has been used as the basis for other writing systems, including Latin, Cyrillic and Coptic.

The Greek language history is divided into six periods.  Each period brought some change to the language, and each had its hand in keeping it one of the world’s most lasting languages.  The periods are listed in here: the Proto-Greek, Mycenaean Greek, Ancient Greek, Koine Greek, Medieval Greek (Byzantine Greek) and the Modern Greek. The Koine Greek is important for those who follow religion origins, because this era the origins of Christianity can be found.  The apostles used this form of the language when they were preaching in Greece and other Greek speaking parts of the world.

In ancient Greek, there were many dialects.  Though it was in this time frame that the Greek language was not used as often, because of the Roman Empire. Even the Romans couldn’t keep the Greek language out of use for long, because it would be reintroduced when Constantinople would fall. The Greek language is spoken by over 13 million people.  These people reside in Greece, Albania and Cyprus, but are also known worldwide by Greek Diaspora.  Greek is the official language of Greece and is spoken by most of the population.  Greek is also a recognised language as a minority language in Italy and Albania, Syria, Armenia, Romania and Ukraine.

This language does not appear to be fading from the world anytime soon, since it’s so popular and withstanding.  It is a language that has shaped many of the world’s languages, and will continue to impact the languages to come.