Interesting Facts about the Bosnian Language 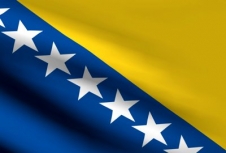 Since the Yugoslavian Republic fell, the Bosnian language has incurred an ample amount of changes and development.

The main reason as to why the language has changed so much is because the residents of Bosnia use it as a way to differentiate themselves from the former republics of Croatia and Serbia.

Early History of the Bosnian Language

There are 3 different groups throughout the entirety of Eastern Europe that have divided the Slavic language: Southern, Western, and Eastern.  Much like other Slavic languages such as Croatian and Serbian, Bosnian was created from the Southern Slavic group.

The Humac Tablet and Bosnian Script

Through a variety of studies, linguists believe that the creation of Bosnian was derived from Bosnian Cyrillic, which is also known as Bonsancica.  With evidence dating back to the 10th century, there have been a variety of different writings that were written in Bosnian Script.  One of the most popular examples of these writings is within the Humac Tablet.  As one of the most significant parts to Bosnia’s history, it’s completely written in Bosnian Cyrillic.

The Vienna Agreement of 1850

As the most important aspect to the development of the Bosnian language, The Vienna Agreement of 1850 stated that the Stokavian dialects that are currently shared by Bosnia, Croatia, and Serbia, would serve as the sole basis for all three languages spoken in the area.

Similar to the Croatian language, Bosnian is created mostly out of Latin.  In comparison to this, Serbian languages were developed from a Cyrillic script.  This has brought forth an ample amount of cultural differences in regards to Croatia and Bosnia and Serbia and Bosnia.

There are approximately 2.5 million people in the world who speak fluent Bosnian, the majority of them currently reside in Bosnia and Herzegovina.  They may also reside in Serbia and Montenegro within the Sandzak regions.  There are many other areas of the world that have received influence from the Bosnian language, due to the fact that many residents were forced to migrate during the war and become refugees in other countries.

As with the majority of other languages, Modern Bosnian language has transformed over the years and now many Bosnians speak different forms of the language to help affirm their personal ethnic identities.  As an example, Bosnians who have taken the Muslim faith use both Turkish and Arabic words alongside the Bosnian language.