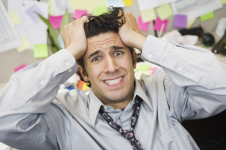 Let’s have another giggle at some of the crazy translations and mistakes that have happened in the world!

Foreigners can have problems with both the vocabulary and grammar of our complex and idiomatic tongue. The following misusages have been spotted around the world:

In their eagerness to move into and conquer new markets, many huge Western companies forgot to do their homework. When the name Microsoft was first translated into Chinese, they went for a literal translation of the two parts of the name; unfortunately that meant it was called “small and flaccid“.

Pepsi‘s famous slogan “Come Alive with Pepsi” was dropped in China after it was translated as “Pepsi brings your ancestors back from the grave”.

When General Motors tried to market the Chevy Nova car in Central and South America, they overlooked the fact that Nova means, “it doesn’t go” in Spanish.

When American Airlines wanted to advertise its new leather first class seats in the Mexican market, it translated its “Fly In Leather” campaign literally, which meant (vuela en cuero) “Fly Naked” in Spanish.

Colgate introduced a toothpaste in France called Cue, the name of a notorious pornographic magazine.

Coca-Cola was horrified to discover that their name was first read by the Chinese as Kekoukela, meaning either “Bite the wax tadpole” or “female horse stuffed with wax”, depending on the dialect. Coke then researched 40,000 characters to find a phonetic equivalent kokou kole which translates as into “happiness in the mouth”. Pepsi, meanwhile, (who have made numerous translation mistakes in the past) told its Chinese customers that their drink would bring their dead relatives back to life.

The Swedish vacuum cleaner company Electrolux told Americans that “nothing sucks like an Electrolux”.

Clairol messed up with their translation in Germany and made the mistake of trying to sell customers a manure stick instead of a mist stick for their hair!

Coors Beer told customers that their beer made people have diarrhoea. What they meant to say was that it “loosened you up”!

The American slogan for Salem cigarettes, “Salem – Feeling Free,” got translated in the Japanese market into “When smoking Salem, you feel so refreshed that your mind seems to be free and empty”

What a fine array of products the world has in its shop window: