How Many People Speak Saho? 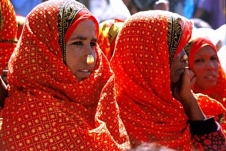 In our world, there is any number of languages that are on the verge of dying out.

Whether by a more dominant culture’s influence or as a result of the few last speakers dying out, there is a race to categorise, catalogue, and record these languages before they are no more.  Having been the way that communities have communicated for hundreds if not thousands of years, these languages offer a rich vernacular.

Though not currently at risk of dying out, many do not speak the Saho language.

Relegated to a corner of the world, the Saho language has existed for centuries, spoken by a small subset of people adamant on keeping the language alive.  Let’s take a look at how many people speak Saho, as well as the culture and people that make up this fascinating language.

The Saho language is spoken in Eritrea and Ethiopia, both African countries.  In Eritrea there is the largest population of Saho speakers, with nearly 191,000 people currently speaking it as their primary language.  In Ethiopia, the population of speakers is greatly reduced, with only 22,800 speakers total.  According to a vast survey done in 2006, there are about 213,800 people speaking this language in the world, with almost every one of those people being a part of the populations listed above.

Who Speaks the Saho Language?

The Saho language is spoken by people who are called the same name, as well as Soho on occasion.  They live in the area referred to as the Horn of Africa.  Being a part of the Cushitic branch of the Afro-Asiatic family of languages, it shares many commonalities with the languages that surround it.  Related ethnic groups and languages include the Afar, Agaw, Amhara, Beja, Oromo, Somali, Tigray, and Tigre.  In addition, the Saho language has four main dialects, including Toroa, Assorta, Minifero, and Irob.

Differences in the Saho Language Based on Religion