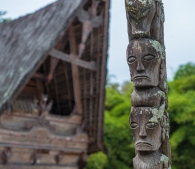 Chances are that you will not stumble upon the Batak Language being taught in a public high school. That is not to say that it is an uninteresting language.

Rather quite to the contrary, it is an incredibly complex language with a rich past.  Spoken in parts of Northern Sumatra, the Batak language shares many similarities to the languages around it.

Let’s take a quick look at the Batak language, and review its history, facts, and other interesting information that you may find useful.

Starting in 1878, German and Dutch missionaries began travelling to the region.  With the construction of schools, the Batak alphabet and language was taught along with the roman alphabet.  This helped spread knowledge of the existence of the Batak language around the world.  During World War I, the Batak alphabet was used as a coding language to send secret messages.  In the past few decades, there has been an increased push to preserve elements of the Batak language and alphabet, as well as renewed initiatives to better understand the formation of this language.

The Batak language is classified under Austronesian within the sub categories of Malayo-Polynesian, Nuclear MP, and Northwest Sumatran.  Individuals studying the Batak language agree that there are two primary language groups, which consist of the Northern Batak and the Southern Batak.  There is a similarity of roughly three quarters between these Batak languages and surrounding languages.

The Batak alphabet uses a syllabic alphabet for its structure.  Every consonant, also known as an aksara, has an inherent vowel.  Diacritics can are used throughout Batak words to indicate the inclusion of extra vowels as well as the removal of vowels.