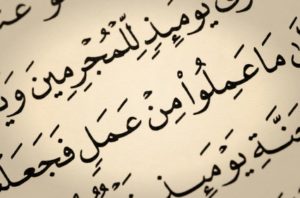 Arabic is one of the world’s major languages, spoken in a broad area extending from the Arabian Peninsula across the Fertile Crescent and on to the Atlantic Ocean. Arabic is the official language of 20 countries: Algeria, Bahrain, Egypt, Iraq, Jordan, Kuwait, Lebanon, Libya, Mauritania, Morocco, Oman, Qatar, Saudi Arabia, Sudan, Syria, Tunisia, United Arab Emirates, Yemen and South Yemen. This makes Arabic the mother tongue of approximately 165,000,000 people.

The importance of Arabic in the modern world is huge as it is the language of the Qur’an. The Arabic alphabet is believed to have evolved from an ancient people known as the Nabateans, but exactly how it originated is still a matter of controversy. Classical Arabic originated around the 7th Century AD, when pre-Qur’anic poetry was composed (although written down later). When the Qur’an was compiled it became the sacred text of the new religion of Islam. As Islamic conquests spread, the Arabic language in which the Qur’an must be recited also spread. In 1974 Arabic was made the sixth official language of the United Nations.

Spoken Arabic varies from country to country, but classical Arabic (the language of the Qur’an) has remained largely unchanged since the 7th Century. This has had a great effect on keeping the development and standardisation of the language. When businessmen from different Arab speaking countries meet they tend to speak in the classical form of Arabic. Like other languages there are many dialects and you could say that people from the Arabian Peninsula in the South speak so differently from Arabic in the North, that it is often considered as a separate language.