A Brief History of the Hebrew Language 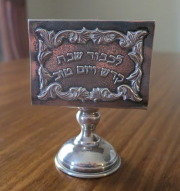 Hebrew is an ancient language that is still spoken today. Most of us associate it with the Jewish faith, or even the state of Israel. And rightly so, for many reasons.

However, Hebrew is not exactly the same as ancient Hebrew. Nor are most people, even speakers, always aware of the history of Hebrew. Here, we have put together the history of the Hebrew language.

We will also trace the evolution of Hebrew as a language itself. Lastly, we will examine the place of Hebrew today.

Hebrew is a written language (although, at first, it was just oral) that is known as a semantic language. It is named for the Hebrew people, in particular, the ancient ancestors of the Jewish people. Much like other semantic languages, such as Aramaic and Arabic, this language contains guttural sounds. It also does not have any vowels. When written, Hebrew is read in the opposite direction across the page than English. Holy texts of the Jewish language (the Mishnah, and the Old Testament of the Bible, for example) is written in the Hebrew language. Rabbis speak a different type of Hebrew than others within the Jewish community.

Evolution of the Language

Ancient Hebrew was both a spoken and written language for a long time. That was, until the historical event known as the fall of Jerusalem. At this point in history, the Jewish synagogue there was destroyed by invading armies. What was known as the Jewish diaspora (or the spreading of a particular group of people to different parts of the world) was sparked by this event. During this period in history Hebrew was used mostly for religious purposes and was only a written language. The time period known as the Jewish Enlightenment, which began around the 1880s.

Eliezer Ben-Yehuda was the man most responsible for Hebrew becoming a spoken language. He is even referred to as the Father of Modern Hebrew. To revive this ancient language in the modern period, he actually made up words for many modern day things while speaking the language. Today, Hebrew is the official language of the state of Israel. Jews outside of the state also speak the language to one another, in some areas. Both sacred and secular literature is written in the language. Speakers study the language as part of their preparation for their Bar or Bat Mitzvah while they are still children.